Overlapping dimension and citizen of the parallel world.

This photo was taken on 18th September, 2005 with the Canon EOS888 on Kodak ISO200 with a tripod. I do believe that at least 3 mysterious events involving teenagers were captured in this photo.

Zoomed Photo Number 1, clearly shows normal teenagers but in semi transparent form. Furthermore, it is also noticeable that there is fire-blowing activity. I had witnessed these group of teenagers with my own eyes before I captured this photo. There were 5 teenagers in white shirts, and were led by a woman wearing a red gown. Furthermore, this group of teenagers were performing a mini Dragon Dance carried by 3 people. However, I felt it extremely peculiar that nobody was bothered to even watch them, and they really looked like ordinary human beings till I had develop this photo.

Meanwhile, the photo before Photo Number 1 was me taking measurement of the fence surrounding the pond, near where the group of mysterious teenagers were captured on the first photo. The fence measured 3 feet 3 inches in height suggesting that the group of teenagers captured in the first photo most probably were citizens of the parallel world. Skeptics might say that this photo is due to camera shake but this photo was captured on a tripod. Furthermore, the height of these teenagers is lower than that of the fence, most probably  only around 2 feet and 3 inches.

Zoomed Photo Number 2 suggests the occurrence of  dimensional shift phases. It is noticeable that the head of the boy appears transparent until the light pole becomes visible through his head.

Meanwhile, zoomed Photo Number 3 shows a semi-transparent boy. Here again, the semi-transparent boy is wearing a T-shirt which looks similar to the one belonging to the small boy walking down the slope. Even though this photo was captured  in a slow shutter but it is highly impossible for the small boy to turn within 1 split seconds since the boy is not running. Notice that the semi transparent boy looks bigger and also the shirt which he is wearing is slightly longer, almost touching his knees. Maybe this zoomed photo suggest the possibility of the small boy's duplicate of himself in the parallel world.

According to Dr.Dave, the resulting anomalies are not caused by Slow Shutter and camera shakes as the images were captured with a camera on a tripod. 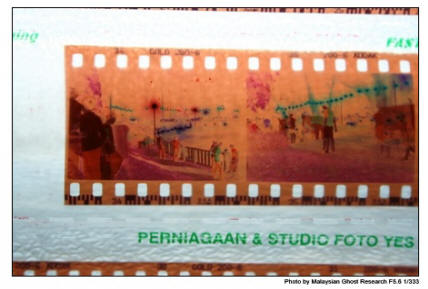