At a glance, someone might think this picture is spoiled but actually this picture records a very important message, perhaps showing the existence of other parallel dimensions.

Perhaps by looking at this picture I believe that this picture records at least 4 different frames of time. The top left picture is the original photo while the rest are enhanced photos for better assessment.

The photo with number 1 at top right is a zoomed photo which suggests that there are overlapping images where in the actual time frame, the students are looking somewhere else and are Malays, while the overlapping image shows Chinese boys instead.

Meanwhile, photo number 2  shows a probable phase of dimensional process where the boy's head becomes transparent and at the same times there is an overlapping figure behind him.

However the photo number 3 records nearer to our time. The three men recorded here most probably come from the colonial days by looking at both men nearest to the boy, who look like they come from a Muslim religious background, while the man behind with the solid helmet suggests that the figure was most probably a soldier during the war.

Meanwhile the last photo suggests another dimension which is nearer our time and the figure is not present during the time this picture was taken. I believe that these parts record a group of people having the same clothes and are not moving figures, because the overlapping figures have uneven streaks showing the difference in height. Notice that the overlapping figures are transparent where there is someone at the back.

I do believe that paranormal research is very important for us to learn and to have some information regarding the past or other dimensions.

According to Dr.Dave, this is an unusual photo and he believes that this photo is a good example of parallel dimensions overlapping into our reality. 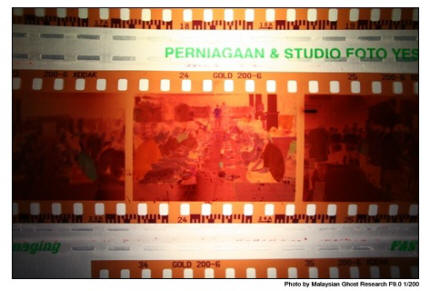