This picture was taken on 18th September, 2005 with the Canon EOS888 on Kodak ISO200 with a tripod. In this picture, the streak of lights become a mystery since the rest of the lights sources do not produce any streaks. and for this reason I do believe that the streaks are most probably parallel orbs in motion and these streaks caused the head of the man in the white shirt to  disappear. The shadow at the back of the man in white shirt suggests that the earlier mentioned streaks are most probably vortexes .

This photo also suggests the presence of not only recorded ghosts in human form but also through the bodiless feet and the orange ecto. It is clear that the legs of the youth in the black shirt disappear or are transparent, suggesting the occurrence of the phases of dimensional shift.

Zoomed Photo Number 1 suggests the presence of the orange ecto. In my opinion by looking at the zoomed picture it is quite noticeable that there is the presence of a transparent figure. Perhaps this orange ecto is the  phase of forming into a human figure.

Meanwhile, zoomed Photo Number 2 shows bodiless feet. It is also noticeable that the foot at the right most side shows a barefooted foot. It is clear the feet are solid but being bodiless suggests that these feet may belong to spirits.

Meanwhile zoomed Photo Number 3 shows a face of a girl with big eyes. This figure may suggests the existence of the spirit in human figure for I didn't see this girl at the time I captured this photo.

According to Dr.Dave, he personally feel that this photo qualify as dimensional overlapping into our realm. 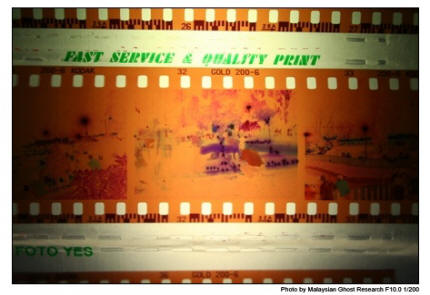