The transparent body and the bodiless legs

These photos were taken on 18th September, 2005 with the Canon EOS888 on Kodak ISO200, and with a tripod. I do believe that at least 4 mysterious events were captured through these photos. Meanwhile Photo Number 1, 1A and 1B are specially for the sceptics. This photo did not capture anything other than physical world events and has been put here just for comparison purposes, to prove that the slow shutter does not produce paranormal photos unless there was something that could trigger off a paranormal event, such as dimensional shift.

Meanwhile, zoomed Photo Number 3 shows at least 2 paranormal events. First, the presence of a white layer which is most probably the colour of the clothing worn by the  spirits of bodiless legs, or the phases of ecto energy forming into human configuration or the reverse. And also, it is noticeable that the body of the girl in black T-shirt becomes transparent suggesting that  dimensional shifting has occurred resulting in the physical background being able to be seen  through her body and yet the boy's body beside her cannot be seen. This phenomenon suggests that perhaps this dimensional overlapping has happened not behind the couple but rather overlaps in front of them.

Zoomed Photo Number 4 shows an overlapping of legs. It is clear that there are only 2 persons standing at this particular spot, yet there is the strange presence of another leg in between the legs mentioned, and it is most probable that the solo leg also belongs to the spirit. Had those two people been in the process of moving, then the extra 'leg' could be explained as part of the double image or blurring that shows movement in photos. However, this was not the case and moreover,  close examination suggests that the extra 'leg' somehow seemed to be standing  in a different position from the other two pairs of human legs.

Meanwhile, zoomed Photo Number 5 shows overlapping images which suggest the occurrence of dimensional shift. Perhaps most of us may think that the anomaly in this photo most probably was caused by camera shake or the movement of the objects that were being captured. But wait, look closely at the person in the red T-Shirt at the middle. First, the T-shirt that the overlapping image wore was a bit shorter. Secondly, the left hand of the same person  was not blurred, suggesting that the person was not moving. And finally, the man in striped T-shirt also become transparent and his legs disappeared, suggesting the occurrence of dimensional shift phases.

My further explanations about this controversial paranormal photo can be seen from the IGHS homepage. Click here to read. 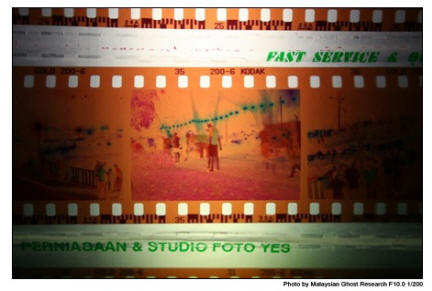