Parallel Universes in a simple empirical piece of evidence.

When we talk about Parallel Universes, scientists will talk about it using wonderful bizarre paradoxes. However, paranormal and ghost researcher will talk about the same theory with simple empirical evidence. Furthermore, scientist believe in the existence of Parallel Universes in line with their suggestion that dark matter either floats around us or even through our body, which explains any ghostly phenomenon. Yet, at the same time, scientists contradict with the psychologist's opinion that ghosts are not a legitimate phenomenon.

This photo below was taken on 23rd September, 2005 at Baling, Kedah with a Canon EOS888 on Kodak ISO200. The said photo had captured on film an interesting phenomenon of overlapping faces. However, many people have suggested that the photo below was the product of a slow shutter camera.

Furthermore, slow shutter effect does not allow a distinct image to be captured. This is because, when a solid subject is in motion, it would cause a double image, a smeared image or the subject to disappear in the photo. 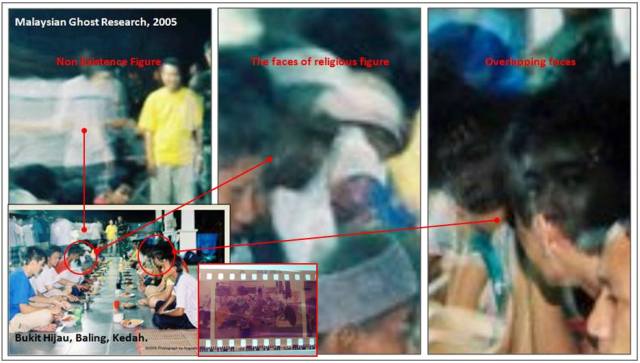 Reality that is beyond the grasp of our tangible senses.

On the other hand, the slow shutter effect indeed is a great tool to differentiate as well as is a method to identify the source of supposed paranormal images captured on photo. Furthermore, the slow shutter effect has been widely known to produce the phenomenon of ghostly photos, whereby images become weird and blur but at the same time it is also becomes a scientific way to differentiate and identify the source and the nature of subjects that create images on film.

As mentioned earlier, solid subjects in motion will create the image of a blurring, smeared or even disappearing subject. However, the effect of a slow shutter does not effect the nature of how a non solid subject that exists in the form of energy is being captured. In order words, the non solid subject captured through slow shutter camera would not create a smeared, blurring or disappearing image but instead, it would be a distinctly clear solid image such as the one found in this photo.

The photo negative below is the supporting empirical evidence of the paranormal photo above. Therefore, does this research finding convince us that Parallel Universes indeed do exist? Physicist have failed to produce even a simple piece of evidence regarding the existence of the Parallel Universes  of which even young kids can tell of when they see something as bizarre as in the photo above. Psychologists are no different, but they only suggest that people emotionally drawn to the supernatural. 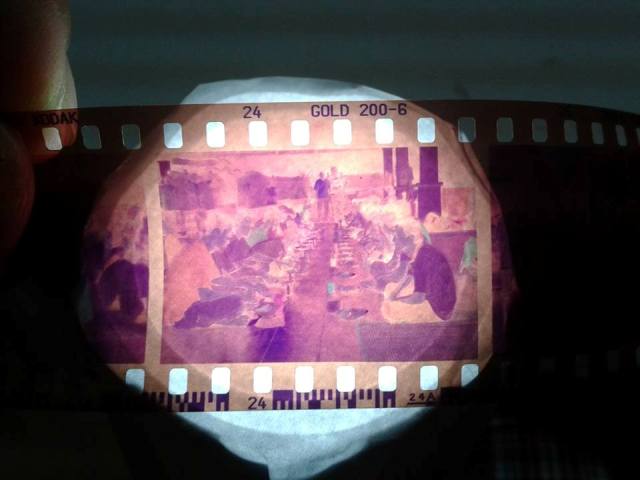 A film negative as solid supporting evidence of photos captured of film before era of the digital photo.

Ironically, even though the science of ghost research has been labelled as misleading information by many, it has captured enough compelling empirical evidence of which even kids can tell of the difference. Indeed, the science of ghost research has helped physicists prove that the Parallel Worlds is not just a bizarre theory but in actual fact of a reality that goes beyond the tangible senses. The above photo which the researcher had captured back in 2005 tells us of the reality of what lies beyond our five fundamental senses. Now, do you now think that this photo is due to a slow shutter camera?